The Kigali Airport is an easy to navigate place…It didn’t take long to get through and there waiting for me was John, the Manager of the Step-Town Hotel where I am staying. John was delightful on the drive back…He peppered me with questions about the States and we discussed the current situation at length…I was so impressed with his knowledge of not only our system but our Constitution.  I arrived to the hotel to only say greetings and retire. The next morning started with a wonderful breakfast and John drove me once again but this time to the Nyamirambo Women’s Center. I had scheduled a 3 hour walking tour that included lunch at a local woman, Aminatha’s home.

The Nyamirambo Women’s Center was set up to empower the Rwandan women who were not given formal education and had no means to support themselves. Many are single women and this left them in quite a bind. They were started back in 2007 by 18 women to provide education and training to disadvantaged women so that they can support themselves and move up the employment strata.

This center has expanded to opening a small community Library aimed at primary school students. The books are mainly in English and French but the little library seems quite popular…As a matter of fact, Seema, a young man who was my guide, started at the library as a child and now he is giving tours.

The Center has created a Cooperative called Umutima that sells housewares and children’s clothing. The center trains women to become craftspeople and they earn a fair wage.

Tourism is yet another aspect of the center…They teach cooking classes, basket weaving and give a community walking tour.

Nyamirambo is the biggest township in Kigali…and you can feel the activity and vibrancy as you walk around. It’s mainly a Muslim neighborhood with Christians as well…Rwanda is predominantly a Catholic country but during the time of the Genocide, it was the Muslims who came to the aid of the population while many churches were reticent in this area…So because of that this neighborhood sprung up with no issues…Many Christians in the Nyamirambo township actually converted after because they so respected what the Muslims had done for them…And Muslims and Christians live happily side by side.

We started at the center where there are 2 rooms of women sewing all sorts of things to sell in the shop. Some sew with electric machines and others with manual ones…and still others sit on the floor and stitch by hand. They get paid a percentage of each item they make. We walked across the street to visit the library and then a Tailor who is not associated with the Center. At the Tailor, if you want to have something made, they will have you pick out a fabric and design…measurements will be taken and within the day, you will have a beautiful new dress , shirt, sari or anything you’d like them to make…. As we were walking, Seema pointed to a building across the street that is a “Milk Bar”. As he explained it, for a while, Rwandans ONLY drank milk as their food source…from there they moved to a vegetarian diet out of respect for the Cow who had given them such a hearty plenty. Because this neighborhood is predominantly Muslim, they don’t drink beer of liquor…so these Milk Bars are THE happening place…they are like corner Pubs…but with Milk! There are rules though…No standing while drinking milk or walking. And to be fair and have the Christians be happy, in the neighborhood, they have and Beer and Wine Bar right across the street! So all are satisfied…If only the world could work together and compromise as this neighborhood does.

We continued on to a Women’s salon where I learned that Primary School girls are mandated to have their hair close cropped like the boys. We were told this is to keep everything uniform and simple…less jealousy and outdoing each other and more focus on studies, Seema explained. At the Men’s salon, we were told that men usually like to keep their hair short because culturally it shows professionalism and success. Dreads or long hair for men are not respected. Men will cut into their hair to represent where in Rwanda they come from…and those engaged have a particular cut as well.

Many in this neighborhood live in compounds with communal water and kitchens. As Seema said, you really have to like your neighbor in order to make that work. We ate lunch in one such compound.  Aminatha, along with the help of a young man from Minnesota ho took her cooking class, cooked a delicious lunch for us.  All vegetarian and all unique…I can’t remember the dishes except one because I had pounded a bit of the “dodo”, which is similar to spinach. The dish is called Isombe…It has dodo, cassava leaves, garlic, green onions…they use Palm Oil but we were told you can substitute Sunflower oil(but not as tasty) and peanut flower are the ingredients…So delicious.

After lunch, we went back to the center where I was met by my driver, Sonia, who was taking me the the Congo Border.

We had a lovely drive and I learned so much about Rwanda…the Genocide and the culture. Sonia is a very innovative woman who is struggling with the place for women in Rwanda. She told me she admired me for being a Single Woman and wishes she could stay single because she so wants to be a businesswoman. I told her that she could do both but she sighed and said it was quite hard to work and be married. After a 4 hour drive across some beautiful land, Sonia and I parted ways. I wished her well and told her to keep her dreams. I hope she does.

Once at the border, I was handed off to Alex, who handily got me through the maze of what is considered the Congolese bureaucracy. One office stamped me and said welcome but then another needed my passport while I was hustled into a building where they took my Yellow Fever certificate and then promptly took my temperature…even though I knew I was healthy…weeks and weeks of taking vitamins and doing all I could to make sure I stayed healthy were finally proving useful! Then Alex said we were all good and off to Lac Kiva Lodge we went…Driving through Goma, where the UN is stationed because of the Civil War here, was a bit unnerving…There were clear remnants of the 2002 Volcanic eruption…Yep the same volcano I am trekking up…Lava rock is everywhere…the UN…NGO’s…very interesting. Goma seems to be a large city but not one I would recommend to stay for more than 1 night. It felt frenetic and a little unpredictable.

Finally, we arrived at Lac Kiva Lodge which is nestled behind a security fence with armed guards and a big barbed wired wall. Lac Kiva is a huge monster lake straddling both Congo and Rwanda. It reminds me of Lake Michigan. Well tomorrow I head off to my first Gorilla trek…to say I am excited is ….well let’s just say it’s a serious understatement! 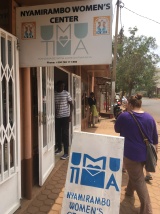 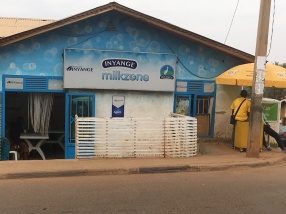 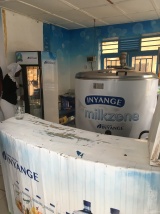 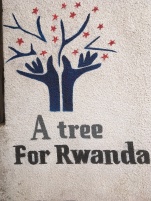 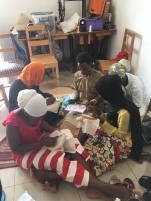 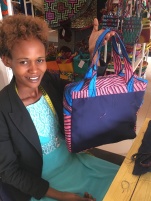 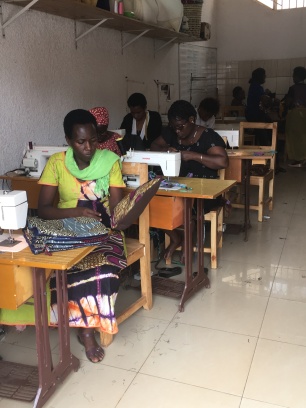 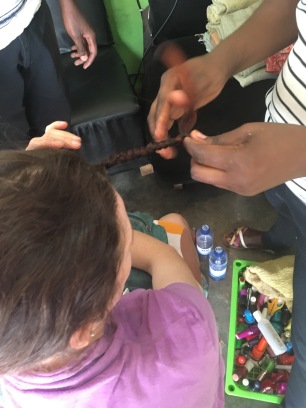 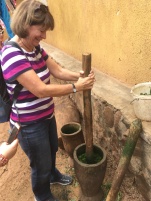 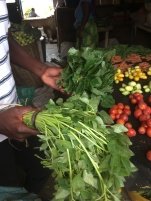 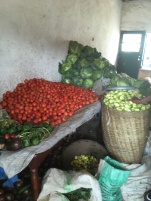 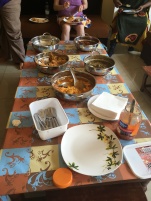 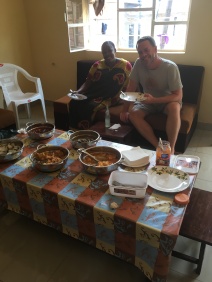 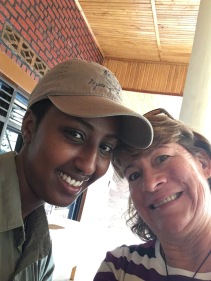 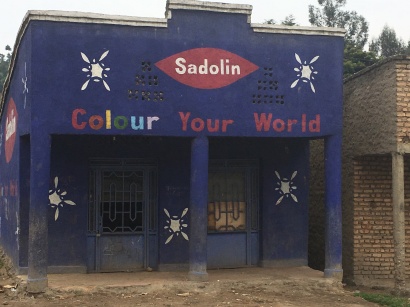 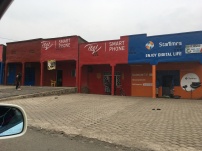 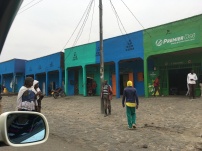