As with all adventures there are bumps in the road…I always see them as future stories and not hardship…The great thing about traveling alone is when a bump happens, you are the only one disappointed. (-: I tried to go to Figueres, Dali’s hometown…I got a late start…that darn jet lag…but that’s ok…it’s my holiday so no need to get too caught up in schedules…I got to the Train Station via Metro quite easily and was guided to a Kiosk for the high speed rail…seems the Kiosk and I were not at all compatible…and the Kiosk seemed to get testy when it ate my main Credit Card! At this point, I did catch myself in a panic…finally I was able to get a man who worked for that particular Rail line…you see there are several so you need to be sure to buy the correct ticket on the correct rail line…This gentleman was kind enough to retrieve my card and made the greatest efforts to help me purchase a ticket…when finally he even gave up and told me to try the ticket window…which I had preferred…BUT the line was insane and I now only had 30 minutes to get my ticket and get through security etc…I stood for 15 and realized my day trip was not to happen…so I threw a Hail Mary and went to the trains office where they informed me that the Kiosks do not like foreign Credit cards…and by the look of the people complaining, they didn’t much like any Credit Cards…So plans changed…I decided to change course and head to the Parc Guell which I had planned for Wednesday afternoon…
Parc Guell is a very large park with hiking paths…but seeing that it was Sunday of a holiday weekend, those paths were packed…but that also meant that there was plenty of action to watch…and listen to as I made my way up the trails…Just getting to this park requires great fortitude…it starts with a bit of an incline and then there is an escalator…which I thought funny…until the escalator ended and I, along with tons of others was heaving up a quite steep road…Finally, the escalator picked up…and mind you, NOT 1 person, not even the youngest among us continued to walk…ALL got on the escalator! I brought a picnic lunch and found a lovely rock off the trail where no one seem to be and nestled in there with my book…i could hear the music of the street performers who were scattered throughout the park…and just enjoyed the semi solitude for a bit. A nice way to spend a Sunday…relaxing with 1000’s of people but finding a quiet space as well.
I usually enjoy playing a little game of guess the language…but Barcelona has so many people from so many areas I have gotten it wrong more often than usual…Today I walked with a lovely man from Senegal…then met 3 tourists from Rome…as they sat down, the man next to me announced “we are a gays!” and he smiled wryly …I think the purse and the very flamboyant way this man presented himself gave it away before his pronouncement…he waited for a reaction from me….but I was at a loss for a response so I stood up and gave him a standing ovation…it seemed to delight him so much his performance grew broader and other people on the metro joined me in my ovation…We started chatting so much I almost missed my stop……I played with several kids throwing a ball against the wall…they were just a gaggle of kids all seeming to speak different languages…except they all spoke the language of Play…Their ball got away from them so I threw it back…and then one of the boys ran up to me and handed it back and instructed me, with hand signals, to toss it at the wall…they seemed delighted to entertain me..but my stomach beckoned for a gelato so off I went…Barcelona certainly is an busy and fun city…

Planned on getting up at 6am to catch the 7:30 train to Montserrat.But it seems I set my iPhone alarm for 6 PM not AM and I woke up at 8:45! Not to despair, I quickly got ready and headed out. I didn’t get to Monserrat until 11:45 but no worries. I found a little shop and bought A baguette of Spanish ham and fromage with, yes, a coke. I learned this trick on that crazy job I did in South Africa. Coke and biscuits..I mean cookies. When you need fast energy to keep you going for a swath of time…and yes it works. It really does. Not good for you and don’t try this at home kind of thing but in a pinch. And this was a pinch. It may be the only good info I got from  that lovely job, other then beware taking an out of the country job with a company you know nothing about and are heading to an area with wild
animals and guns with people you don’t know…at all. Enough said. Finally made it on the mountain trail. Whew. I love cities but my soul loves a good mountain hike with the quiet of the breeze. Note when traveling with me, try to avoid my chosen hiking route. I seem to take the path of most resistance. I give kudos to Tucker, who when we travel .  together is always a willing person even after he realizes I took on the wrong or rather most
difficult trail. Glad I’m taking those Alive Energy vitamins…Because this does require energy…and being alive…for sure. They say it’s an hour and half up but I’d been at it for an hour and still had another hour to go. Maybe it’s all the flower pictures or possibly the time it takes as I heave some air in my lungs as I prepare to propel forward.
I took the trail 5 min longer because it looked more interesting. Remember my previous admonition. 5 minutes is Bull…5 minutes if you are a pack mule who is on fast forward or taken a bottle of my Alive Energy Vitamins.
The trail is empty. I had only crossed paths with a few people. One oddity I’f seen was a couple of actual
runners on this trail. I must say they build them strong here in Spain with insane stamina to run this trail. The steepness and cragginess alone would have me down for the count in minutes. The solitude and
fresh air are wonderful, both of which I will be lacking for the next 4 1/2 weeks. I love the quiet of a good solo hike. It’s like meditating… Isn’t the goal in meditation to be focused on your breath?…well I certainly was breathing..and quite conscious of each breath, at that ..almost as if it may be my last!

Just when I thought I couldn’t go any further, a troop, and I do mean troop…all with name tags, of about 10 Mormon missionaries came down the trail. Man, those kids are so fresh faced and friendly. Like out of a play…they really should do one (-; I have never met a Mormon who wasn’t amazing friendly and seemed like they came out of a Gidget Episode. For a moment I thought they might break out into song because their energy was so effusive. We chatted a bit. I used this encounter asa chance to catch my breath. They were assigned to Barcelona for 2 years. Now that assignment might even entice me to knock on a few doors.They cheered me on and promised I was close. I wonder if that encounter of encouragement was a sign from God that I chose the right
path after all (-; Well enough of that religious reflection, I am off to the Catholic Basilica! Monserratwas beautiful and huge…but I ran into this Texan guy and 2 Florida women I met at the Barcelona station. Let’s just say the women were bickering and the man was looking for someone else to sit next to on thetrain but I was Not interested. To be polite he was a bit annoying. Because of them, and my rushing ahead of them to avoid being seat mates, I ended up in a crowded section. But alas I met a lovely older couple from Texas who entertained me with their travel to 54 countries in the last 10 years. They were amazing…in great shape for 80 & 81. I  would have guessed late 60’s. It’s amazing how someone’s energy really defies their age. I digress. But those other 3 caught at the Basilica and I decided I would cut my time which was fine since I had a late start and my true goal for me was the hike. But Montserrat was wonderful and well worth a nice visit. I was hoping the trail would be kinder to me on my descent. The clouds had rolled in and the breeze was cooler. I just hoped is be faster. And it was… Because I took the other trail BUT now I am happy I took the other one up. This one was almost all stone stairs. It reminded me of trekking in Nepal. The lower region was all stone stairs. Tears would run down my eyes, involuntarily, after hours of it. Thank goodness these stairs were only about a half hour. But going up would have been a terror. The trail emerged as a wide walking road. As impossible as it would seem, I somehow took a wrong turn and the trail eventually dumped me on a mountain highway. Little to no shoulder. When I finally, and it did take some time, got down I was completely lost. OK OK, I know this is an old song of mine But….I asked a woman who did not speak a word of English but was kind enough to, at least, walk with me to a bridge and give me directions. The 15 minute walk allowed me to practice my Spanish a bit more. Miraculously, I made it to the train station and actually made the early one. This day has earned me a double…gelato, that is.

It’s taking me a bit to get my travel legs this time… by the time I get to Iran I should have my Barcelona legs under me perfectly.

By the way this site is extremely finicky with pictures so I may not be able to post them for a bit…I will create a Barcelona Page and then 1 for Iran etc…but to be honest if it stays this finicky, I will have to wait to post pics until I get home…If you are on Facebook then you’ll see pictures now…FB seems an easier platform…I will do my best… 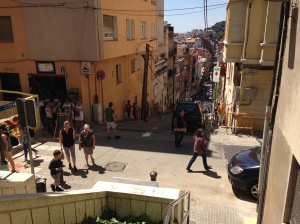 It starts out steep But gets worse 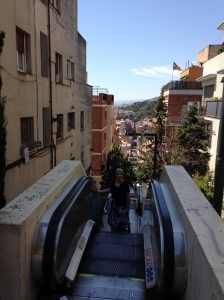 Don’t be shy…everyone uses the escalator

Not a trail for solitude 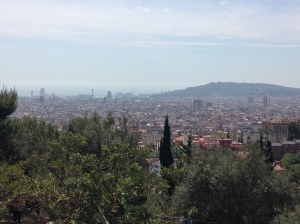 One of the Trail Entertainment 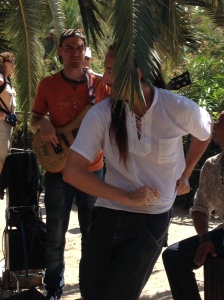 Dancing to his beat 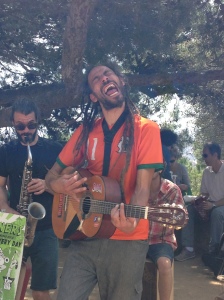 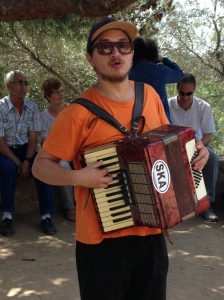 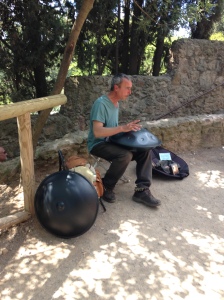 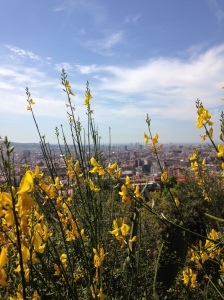 Barcelona seen through a bit of nature 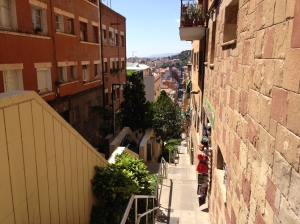 Whew…it’s all downhill from here! 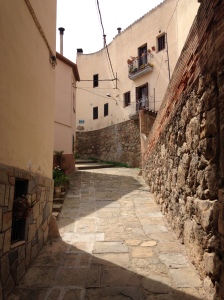 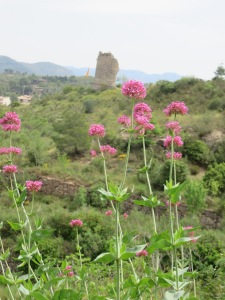 Nature on the trail 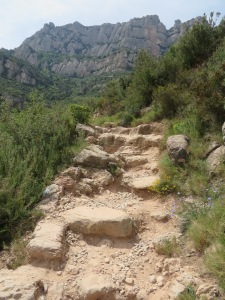 Making my way up and up the trail at Monserrat 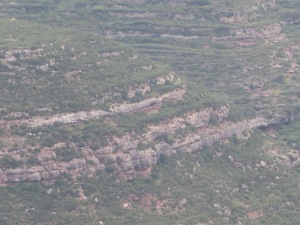 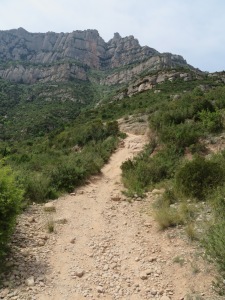 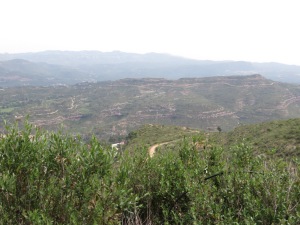 A view from the trail at Monserrat

Live life like you are the only Purple Flower among all Yellow…Stand proud and tall (-:

Nature in action at Monserrat 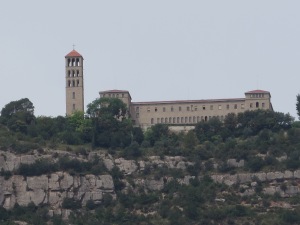 Monserrat with a long lens 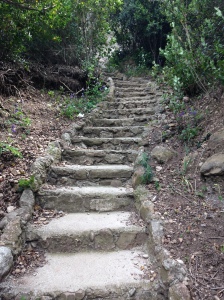 This picture of the stairs really doesn’t do the elevation justice…TRUST ME! 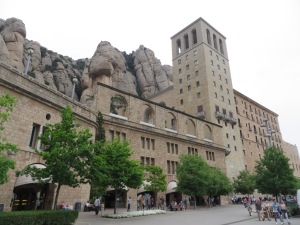 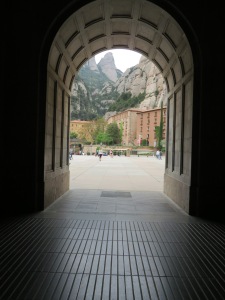 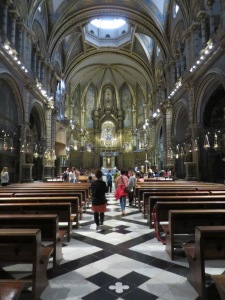 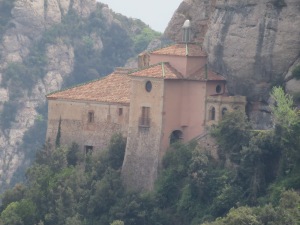 A distance shot with a long lens 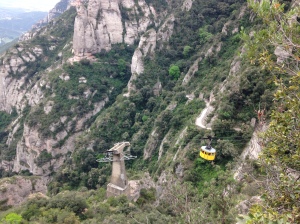 Some people are enjoying the ride 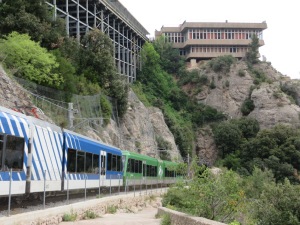 Yep…taking the train up would have saved me time and my legs…but then there would be no story to tell (-: 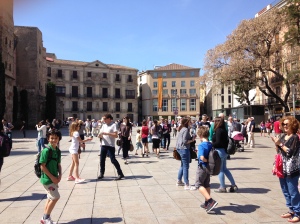 Action in a plaza in Barcelona

6 thoughts on “A few more Adventures in Barcelona”