Greenland: Majestic, Stunning, Awe Inspiring, Magical…I think you get the picture…Seriously…the only other place that gave me this feeling were the Himalayas…but the multitude of Ice Bergs on the Ilulissat Bay was breathtaking and literally Chilling! ..and a little scary when you consider that they are breaking off the Ilulissat Ice Cap at that rate..and in those sizes.

With all that said, Ilulissat was a much bigger and messier place than I had imagined to be in Greenland…it is the 3rd largest city with approx 4500 people but it feels even more crowded…But a great base to do tours from…several hiking trails are available too…but what I found to be most memorable were the places away form Ilulissat…it didn’t take long to get away…and once you did, you found the views fabulous…lots and lots of pictures…Greenland’s landscape is reminiscent of Scotland and parts of Wales…with the rolling and rocky Mountainous Hills…The terrain can fool you…it looks easy and inviting at times and will surprise you with a hidden dangers… where Ice used to be solid but now is just a thin sheet could be covering a deep crevice…rocks not seen but certainly felt when the toe of your boot catches them…but the quiet of the air in the hills or by the seaside is a wonderful respite from Ilulissat’s hustle and bustle…Standing by the sea and just watching the Ice Bergs is mesmerizing…One day…or actually evening(just like Iceland no real sunset in summer), I just sat on a rock and watched the ice bergs as they listed a bit and imagined as they continued on their path north around Baffin Island and, as our boat captain told us on the midnight sail, can end up as far away as NY! Again, they feel very confident the Titanic hit one of their Ice Bergs…so confident that when the movie Titanic premiered in NY, it also premiered in Ilulissat the same day! The entire city attended.

The little villages, like Rodebay, are what Greenland is really all about…but tourism is beginning to take hold here in Greenland and most of us agreed that if we returned in 10 years, all would be different…At the Eqi Camp, they are fairly certain that the Ice Cap tongue will retreat far enough that within 10-15 years it won’t be able to be seen by the huts.

Then there are the sudden opportunists searching for the new Gold Rush…Seems China is hot for Greenland…as I mentioned in an earlier blog, Greenland is a territory of Denmark BUT is fully autonomous…their new Prime Minister seems to be reluctant to let China or any entity in so quickly…which is good….BUT the money may be hard to refuse in a country whose economy is mostly dependent on Denmark. Fingers crossed they hold firm…it would be further tragedy to the retreating Ice Cap if even more development and Mining were to come in.

Since I only saw just a brief part of Greenland, I can only speak to those areas…I loved the hiking and all the boat trips around the Glaciers and Ice Bergs…This is definitely a place for adventure and those who love to hike and be outdoors BUT there were many here, like my 89 year old German friend, who enjoyed the helicopter ride around the Ice Cap…the Midnight Sail and a few other tours that were less physical…There was also my Swiss friends…who also happened to also be on my plane back to Iceland, along with the German man I went to the Cemetery with and the lovely young German couple whose husband was so prolific in language…back to my Swiss friends…they spent 2 weeks, like me, in Iceland doing the ring road and were looking to just relax in Greenland….so they tooled around town and enjoyed nice hikes and relaxed by taking in the views…So there is something for everyone…

I loved the Hotel I stayed at, the Avaanna…besides being so perfectly situated to enjoy the views of the bay, the woman who runs the hotel and her staff were so wonderful and helpful. All were Danish but had lived in Greenland between 1 year to 14 years so they had all sorts of great information and stories. I highly recommend the Hotel Avaanna.

World of Greenland is one of 2 touring companies there and the one I mainly used for the midnight sail and the tour of the Settlement…it also owns Eqi Camp…They, too, were fabulous..and all their guides were wonderful…and so eager to please.

And I can’t forget Ole from Rodebay, who runs Hotel Rodelys and the boat to shuttle to and from Ilulissat…he was so informative while we zipped through and around the Ice Bergs in his little motorboat…he saw how fascinated I was by the size of one that he buzzed us up close…probably closer than we should have been…but man was that neat…and for him to be concerned about me trekking alone for the day, so much so, that he wanted me to check in when I made it safely was too sweet.

Let me not forget all the wonderful international people I met…funny, we kept running into each other on various tours or boat rides…hikes and airplanes! And the new friends I made at the Eqi Camp…I learned a lot on the adventure…Oh I almost forgot…I finally met an American…I thought I was the only one there…as I was leaving Greenland, I heard an American woman…I walked up and asked if she was American..you never know…she could be one of our friends from the north in Canada…When I asked, she asked me are you the woman from Florida? Haha…that caught me off guard…turns out she is from Clearwater and heard there was another woman from Florida…that’s how small this place was…She has been to Antarctica and wanted to come to the Arctic for comparison…She likes Greenland far more, she said because the Ice is thicker and the Glaciers are so much bigger…also, there is much more to do…So I am glad I did this first.

After meeting so many other traveling spirits, they have all given me new places to think about AND reinforced some on my already long wish list…like Borneo and Burma…now I have exact places to see and things to do based on their advice…

Greenland is a big 2 thumbs up…3 if I had them…BUT…if given the hard choice between Greenland and Iceland…I would have to say Iceland for it’s diversity of terrain and things to do and even more importantly NO MOSQUITOES!…BUT then I didn’t have to make that choice…and I am so grateful for that.

I am about to leave Keflavik, Iceland, where I stayed yesterday after my evening return from Greenland. I am so very sad to leave both Greenland and Iceland but I am also very happy for this experience. This truly was a real adventure.

Feel free to email or message me if you want any details of places, hotels etc… 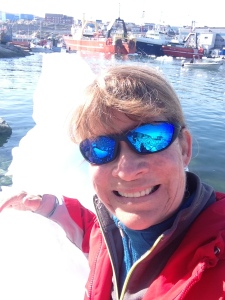