One day I need to take a vacation where I can actually sleep in. Today started early trying to get all packed and out of the guest house… I  hiked over to Hertz with a slight detour when I stumbled upon the Guest House I am staying at on my return from the Ring Road drive for the night before I  leave for Greenland…always the production person, I had to scout it out and verify my reservations….where to park..then off to get my car…where they thought it would be a good thing for me to get “Volcano Ash & sand” insurance for my drive in the south…I declined and felt that I could navigate through whatever treachery the volcanoes had in store…turns out a positive benefit from rain is no ash! See, there is a bright side to driving in fog and drizzle.

The day was actually not too bad starting out…cloudy and cool but not bad. Once I sat in the car, I realized that they had rented me a car with Manual Transmission…hmmm…I sat there pondering whether I should go in and admit to not having driven a stick in 14 years….no, I thought, then they’ll think I am a wimpy American…I am going to soldier through this and hope I don’t have to buy a new clutch by the end of the trip! Surprisingly, I had forgotten how much I loved driving my old Stick Shift! And it is perfect for this terrain too. More control…as long as I remember to put my foot on the clutch when turning on the car…that does seem to be a stickler for me.

They also gave me a Garmin GPS..pre Programmed for my first sights(not too hard since they are in the Golden Circle which is their biggest tourist attraction in the south)…But alas, it was not as easy as it seemed…most of you know I am directionally challenged and some know how much I dislike GPS’. I don’t trust them and have had more occasions where they led me very astray…and today was no exception…you would think their National Park, the one pre programmed, would be easy to find….it’s a good thing I actually read the map when Ernesto(the House Caretaker) helped me pick out some additional interesting stopping places…the lovely lady from GPS…you know, the one that gets very insistent when you don’t follow her exact instructions, regardless of whether she is sending you across the wrong part of the country. BUT eagle eyed Emilie caught the right road on one of the many many turnabouts leaving Reykjavik. After a bit of turning aimlessly in circles, I was finally on my way…The Golden Circle, as I mentioned,  is Iceland’s pride of the south. It is a beautiful National Park…very desolate…no trees..although I saw thousands of little sapplings planted on my way out…eventhough this is a huge tourist location where buses come to drop groups from Japan to Germany…it still feels very sparse. The tourists, at this point, who choose to come here, are a particular breed…not the typical loud and brash type(sorry if any of you fit that bill…but I sincerely doubt that any of you are loud and brash!) …although I did come across some older Americans in Reykjavik who complained after eating at a restaurant that the bagels were not up to snuff…Yeah, Bagels in Reykjavik? Really? It’s Iceland! But These are the tourists who look only for American things.  I think the food has been very good…from what I read, I worried that I would be relegated to pickled foods only…but instead I have found fabulous seafood…lamb, great little vegetarian  restaurants and those lovely Noodles!

The Golden Circle  includes Thingvellir National Park, The Geyser at Strokkur and Gullfoss, the falls that are more powerful than Niagra. Soon iceland is going to harness this wonderful Falls to power the south.

The geyser was fun to watch but I enjoyed more the hike above it…it gave me a chance to test out my new boots..somehow walking the streets in Florida didn’t give me the confidence they would hold up…or rather my feet would hold up on such rocky and uneven terrain…but to my very pleasant surprise, they were perfect…When I went to Nepal I bought very expensive leather boots and proceed to slip and fall throughout my first hiking days…until I ditched the boots and wore my sneakers…These boots are Merrills and they are a lot cheaper and super comfortable…I guess I am a cheap date…I’m a “two buck chuck” kind of girl in my wine…and my boots are the same! (-:

Once I finished at the Falls, I began to head down the mountain, again with the assistance of Ms. Garmin…and again she took me way off course…by the time I caught this one, we were an hour in the wrong direction…so tomorrow it is all about maps…even with my usually questionable ability to find myself from point A to B, I do seem to be better than the technology on this one…I know there are lots of you who swear by her…but little do you know, much of the time she WILL get you to your destination but in a very long round about way around! …and it is a good thing for Ms. Garmin that I don’t mind getting lost, I tried to take in what was around me…on the way up, I saw this woman on a horse, leading no less than 30 horses…all were trotting happily behind her in single file…just like little puppies…it was fascinating…I tried to take pictures but they didn’t quite work out…but no worries…while coming back(after 3 hours up there), I saw them again…they must have travelled 20-30 miles…I guess the cold weather keeps them going… Icelandic Horses are very unique… if they ever leave Iceland for any reason they are not allowed back…I have also been told that they have 2-3 extra gaits than our horses…they are treasure here…no glue factory for them…EVER…they are like pets…I watched a group tonight on the way back from dinner, jumping all over each other like puppies playing…I have watched horses before but these guys do seem a bit different…I am going to learn a bit more and report back…

Once I found nr. 1(the Ring Road), I was home free…head north…but once on the right road, the rain started coming down in buckets…Even with the rain, this drive was spectacular…the fog and mist added a bit of ambiance…as if Iceland even needs anything added…

As I was driving through the fog, I noticed the hills to my left were changing a bit…instead of grass, they now were speckled in green moss..and interspersed between the moss was volcanic sand…I thought, that must be the dreaded sand that Hertz wanted me to spend a small fortune insuring against destroying the paint job if blown into the car!…to my right were these very desolate lava fields…the black Lava mixed with the mist & Fog and a CD filled with old 70’s music was the perfect trifecta . I was in heaven…who knew it would be so foggy & cold…but I guess that beats the alternative, eh?

I stumbled…and I do mean stumbled onto another waterfall on my list of “must sees”…I had decided to head for the hotel and read my new novel since I didn’t see myself getting out in this mess…Pneumonia at the beginning of a trip is a no no….but suddenly there it was: Seljalandsfoss Waterfall….it  is one of two in this area…but this one you can walk behind…and may I add, get soaking wet!…Thank goodness for my new REI quick dry pants…AND the long underware that Becky lent me for this trip…Thank you my Sister!…the advice about no jeans has been good…they would be uncomfortable here and no one wears themBesides a good drenching,  for some, it was a game of slip & slide across some very slippery rocks…but my trusty boots kept me steady and without a tumble…can’t say the same about the guy in front of me.

A little side note…the “porta pottys” in Iceland should be copied by all…they are a masterpiece…and I am not sure why I was so impressed…whether it was truly because they used a real toilet and sink with clean floors and no stench of chemicals…or I was so desperate for anywhere(there are no hiding places on the side of the road down South…no trees…no nothing…As many, who have followed my travels in the past, know…I seem to have a bit of an obsession with the bathroom on my travels…I do find bathrooms, especially in other countries, quite an interesting thing to follow! (-:

I eventually did find my hotel for the night…to say it looks like a prison is an understatement…it reminds me of buildings I saw all over Slovakia…very institutional…BUT it is NEXT to the other Waterfall and a little Museum…They have a restaurant that serves dinner BUT only their buffet for 55.00 ! So off I went to the next town over called Vik…Not much to the town and only 2 places to eat…one was a diner in the gas station…aI went in but after watching the cook sneeze and then put a burger on the grill with that same hand, i high tailed it out of there and asked about another option…i was directed to this little cafe..The food was good..and the best part, they let me use their internet…Wifi is so hard to find on the road and it is sketchy at best..

As I left, I noticed the fog had really settled in…very thick…I stuck some Carly Simon on in the car and headed back with “Anticipation” blaring…Eventhough the sun really never sets here during the summer, with the fog so heavy, it has felt like dusk most of today…And then I did it again, I stumpled onto a place I was supposed to have seen today but the rain held me off…now it was just mist so I thought why now try it…I wanted to see some Puffins…So I drove out to the coast(not really that far) and WOW what an amazing sight…black lava Beaches meet the sea with spectacular rocks covered in moss jutting up form the water…Birds flying around the top…unfortunately,  the park was closed so I didn’t get to see the Puffins and I’m not sure I would have seen much with all the fog…But oh my what a beautiful place…and once again the fog gave it the spice…I could see a fabulous scene in a thriller taking place here…as the heroine tries to escape…running up the Lava Beach only to be stopped by the rising tide….oh I digress….well seeing that my brain has shifted ..I will bid adieu and go continue my new Dan Brown novel!

One side note…this hotel is a monster back packers palace…when I  got back last night, there must have been 25 young French male backpackers…in all manner of dress walking down the hall to and from the shared bathroom & showers…YES it was a good night for eye candy! (-: 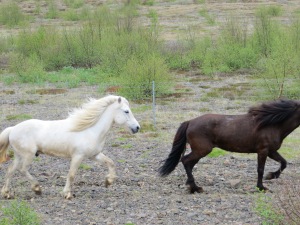 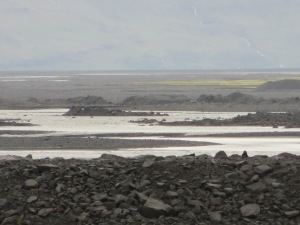 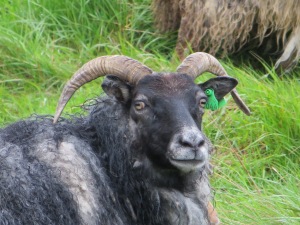 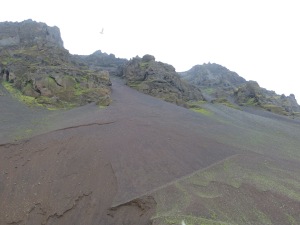 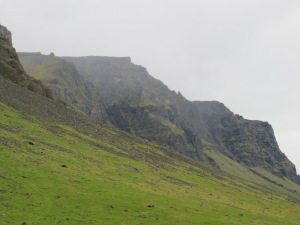 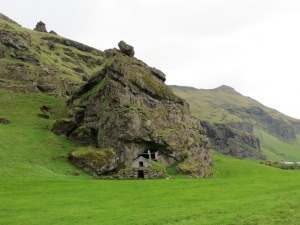 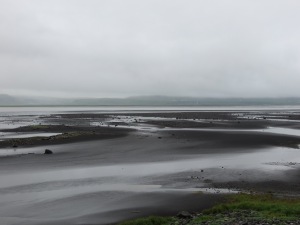 No Puffins  but lots of fog

This waterfall has more energy than Niagra falls 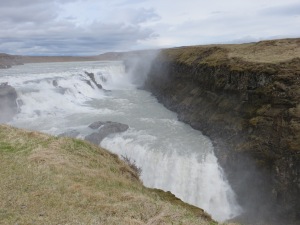 13 thoughts on “On the Road in South Iceland”