Once I got settled into my room and freshened up a bit, Rafner Hermannsson, who many Orlando Production peeps may remember working with Last Stage and as a PA back in the 90’s…Well he is now a Partner and Producer at True North, a Production Service Company in Reykjavik. Rafner took precious time out of his amazingly busy schedule to take me to lunch and give me a great introductory tour of the city…After a fabulous lunch of speckled catfish and a topping all sorts of pickled Veggies(veggies are rare here since all but root vegetables need to be imported), we toured a bit…Some roads were blocked because Iceland just had an election and their Parliament was meeting for the first time…Even with the detours, I noticed very slight security…it was reminiscent of the old days in the states when you could walk up to all the places in DC…very relaxed….after our touring, Rafner took me to his office to show me around…His offices sit on the harbor…his company is doing quite well and Rafner managed the Iceland portion of the movie “Noah” and is also working with the 2nd unit on Transformers among other projects. For those who know Rafner, I thought you might enjoy the update.

Rafner dropped me back at the Guest House, where I proceeded to break my very important rule of No Napping on an arrival day, especially if you arrive on an overnight flight. BUT I was totally shot and needed sleep…and I was not as concerned about Jet Lag since if I woke up in the middle of the night, where it is still light out, I would just go wander the city! Bedda tells me there is little crime and the city is very safe…another huge plus for Reykjavik…plus the city is going strong until about 5am.

After my 4 hour nap, I woke up and meandered out to see what I could discover…The clouds had given way to actually sunlight and blue sky. I wandered toward the water, slightly in a “just woke up” daze. There is a great wide walking & biking path along the water and it seemed many were out enjoying the rarely seen sun…I decided to head toward the Opera House since Rafner told me it stayed open until midnight…it is quite beautiful piece of architecture. They had this place ready to go when the 2008 crash happened…there was just a big hole in the ground but they saw the value in finishing it regardless of the crash…how smart they were…it is now one of their best tourist attractions and used by the locals as well.

After my exploration of all things Opera(ironically this is the music my neighborhood partiers found most appealing to drink into the night ), I decided to wander into some neighborhoods…as many of you know, my favorite thing about traveling solo is wandering and exploring places off the beaten path…I call it “atmospheric tourism”…it’s like you are a fly on the wall…I stumbled upon a group of little girls playing…and as I passed by, I heard unfamiliar language but in a very familiar cadence… of counting…as I looked over, I saw the kids scattering in the recognizable rush not to be found and tagged…their laughing could be heard for a couple of blocks. It also caught my attention because of how late it was…after 8pm at night…The light was like that of 4pm in the afternoon…people were everywhere enjoying the semi clear brisk “evening”…It really impresses me how safe Reykjavik is and how many kids are out playing all sorts of things on their own like we used to be able to do…I started to smell all the cooking from houses and decided to find a place to eat…initially I thought about going to the market and cooking but after seeing 8.00 grapes and 7.50 cereal, I was afraid to look at real meals…I thought, I’d rather spend a few more bucks and not have to cook or clean up! Lucky for me I found this great little place called “The Noodle Station”. It serves only 3  Noodle Dishes: Chicken, Beef or Veggie…but oh my was it delicious…and filling..and perfect to put me to sleep…. I got home close to 10:30 and one of the guests,  Richard was up getting ready to go out for the evening but wanted to give me some tips on my upcoming trip around the Island…did I mention most locals don’t even go out until after midnight…they basically do the bulk of their drinking at home, cheaply, and then head out…Iceland is very very pricey so a night out could be a huge hit even for just a couple of drinks…The dark side(figuratively) of Iceland is their high rate of alcoholism…I can only assume it stems from being holed up for most of the year when it’s dark for most of 18-23 hours…so they drink to get through that…and when it’s light, the happy partying begins…Seeing that I am used to getting to bed earlier than…?   (-:  ….I was happy to be tucked in by midnight (-:

Today, I got up and made breakfast and chatted with some other guests who were heading out do do some of the lower Ring Road…so far I have not met anyone doing the whole road…I wonder why…hmmmmm…

After breakfast I had to pick up my travel package and local cell phone for my Journey around this lovely Island on Sunday…I decided to walk instead of taking the bus, even though I had no idea where I was going…but when has that ever stopped me? (-:  As I see it, getting lost is just a new form of discovery…so many people ask me why I enjoy traveling solo..I want to say something philosophical and enlightening…but truth be told, I just don’t want to have to keep apologizing for getting lost…which BTW I did while looking for Iceland Tours…BUT I  finally did get to them and in the process discovered what might be the only hiking trail in the city(I will post a couple of pictures to prove it!)…see a new discovery… I decided with my penchant for being directionally challenged, I would scout out where I was going to pick up my car so I won’t be late(only time I hate being lost is when I must be somewhere on time…like work!)…and Voila, I found it…then it was off to play tourist a bit…I did the Perlan(The Pearl) which is a domed building that you can go to the top and take pictures of the whole area…it also has a museum and restaurant and all sorts of activities. Pics below…On the way back I decided to wander a bit…I just meander until I find something interesting and different out of the way…lucky for me, I am staying near the tallest structure in Reykjavik, the Church…so it is a bit hard to really get lost…but I am sure I will get plenty of opportunities while driving along the desolate Ring Road.

I found this area where the buildings were nondescript concrete stucco for blocks and blocks…and then there would be a little gem…like this park that suddenly appeared out of the dull architecture surrounding it…I watched a bit as several people were planting the summer flowers for the neighborhood to enjoy…Icelanders really take pride in their homes and neighborhoods…most don’t stray too far from Iceland…they may go overseas for college and the start of their careers but most return…it is so insulated here that there is an App for Icelanders to use when they meet the opposite sex at a party etc…it will tell them how related they are and if it’s ok to date! True!!! Most Icelanders can trace back to the same ancestors…but the question is how far back or how close they are connected. (-:

A little genealogy lesson…as most know, I love genealogy:

In Iceland, one family will have different last names…it is mainly a Patriarchal naming system here but they sometimes do it through the mother too…which means the kids take the fathers first name as their last with the suffixes of “son”for the boy and “dottir” for the girl…and it is the first name that is distinctive… that’s how you are listed in the phone book…for example…if there is a family of four: Mother, Father, son and daughter…Father’s name is John..Mother is Helga  Son is Jack and Daughter is Claire…here is how the children would formally be called:

Son is named Jack Johnson and the daughter is Claire Johndottir

If they took the mother’s name it would be Jack Helgason and Claire Helgadottir.

Well there is a little info that you can file away for the next trivia game!

Iceland is not a cheap destination. It has no manufacturing and imports most of it’s products including most vegetables, other than root ones that can grow here…The fish is aplenty and fresh as can be…they also enjoy mutton and some other types of meat…As expensive as the restaurants are here, their serving are quite generous…I ate at this wonderful seafood place in the harbor called Sea Baron…It is a little divey type  place inside with long wooden tables and hard stools with a padded disc to sit on…you pick your lunch from the raw fish skewers in the refrigeration case and they grill it right there for you… they are known for their Lobster soup…and it is delicious…but the lobster is incredibly tender and is unlike any I have tasted…I had that and a tray of scallops and veggies(just onion and something else)…I sat down near these 2 American women who had just arrived and looked like I did yesterday…we chatted and when my dish arrived the woman serving apologized for how small the scallops looked( to me it looked like a ton of good scallops) and then she brought me an additional skewer of 8 huge scallops…I was already full from the soup and the small scallops but she was insistent that it wasn’t right that they were so small…seriously…when have you heard of a restaurant doing that WITHOUT you requesting it or at the very least, complaining. I was quite impressed AND the food was delicious.

Here are some pictures to give you a little idea of Reykjavik: 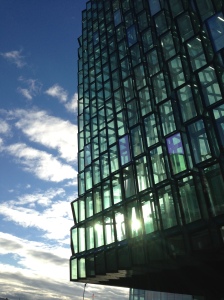 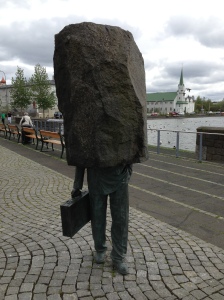 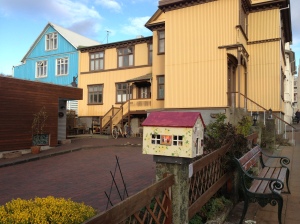 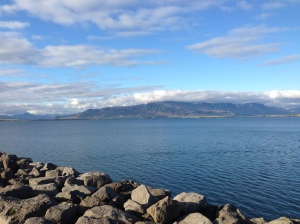 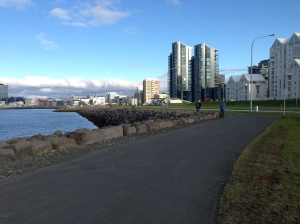 View from The Pearl 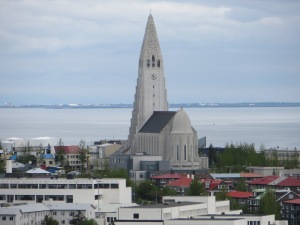 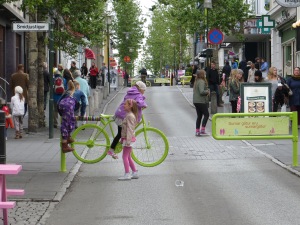 Me with the Persecuted Whale(they are trying to stop the killing of whales so this whale wonders the streets to get signatures to stop the slaughter…it is an odd juxtaposition since they make a ton of money on Whale Watching AND then they have this Whale Slaughter Bay that is mainly to feed the tourists desire to try Whale meat…reminds me of Florida’s need to kill sharks for their meat…but I don’t see many Floridians fighting to save the Shark…and certainly not in such a great costume(or half costume)! 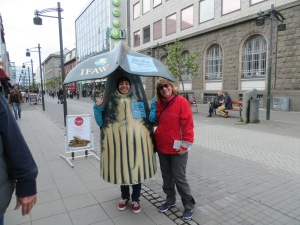 10 thoughts on “Reykjavik Wanderings and Such”